How a Multi-Generational Dealership is Providing Faster, Better Service to Customers Every Year 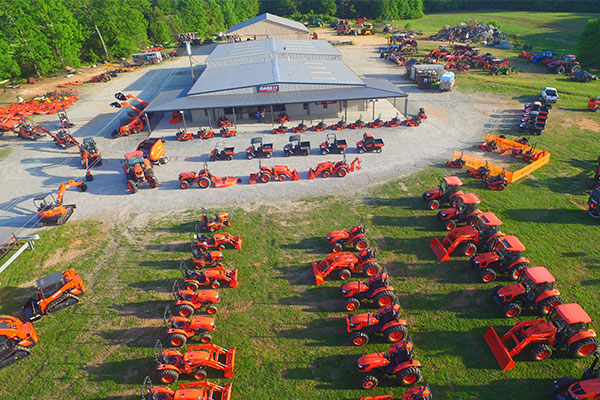 When you’re working at a multi-generational business, you need to find a balance between tradition and innovation. You want to preserve what has gotten your business to where it is today, while also creating security for the future.

At Brooks Sales, Inc., a Kubota and CaseIH tractor dealership in Monroe, NC, employees aren’t just treated like family—they are family. Jeremy Brooks is General Manager and a third generation at the business. Jeremy’s grandfather started the business back in 1978. His father is 68 years old and still involved in the dealership’s daily business. Now, they’ve got the fourth generation helping out as well—Jeremy’s two sons and his cousin’s son.

As you might expect from a family-run business, the Brooks treat their customers like family too. Stepping into the management role, Jeremy knew he wanted to make some technological upgrades in place that would provide his family and the rest of the Brooks Sales team with security.

One of his most recent changes was implementing a new credit card processing system that integrates with their DIS dealer management system—Gravity Payments emergepay.

We had the chance to chat with Jeremy about how implementing new technology has enabled his team to work more efficiently while maintaining their family-like approach to customer service.

How does the family atmosphere on your team translate to how you build relationships with customers?

Jeremy: We’re surrounded by two John Deere conglomerates, James River and Quality Equipment. I’ve got one of them in town that’s five miles from me, and the other one just east of me and north of me. What a lot of our customers tell us like love is that they can still come in and talk to somebody who can make a decision. They’re not waiting on it to be handed down from corporate. They like to be able to deal directly with somebody who can make decisions, help them, and who has relationships with them.

I like that thought. I want to be in connection with my customers. I stood over at the parts counter this morning having a conversation with one of our customers—it had nothing to do with business. I know my customer base. I want us to keep it that way.

Can you tell us a bit about your day-to-day role at the dealership and how you’ve been updating the technology your team uses?

Jeremy: I have done everything. My cousin and I both work in the set-up shop. I was the set-up manager for a while. I was the service manager. I was the parts manager. I’ve done about every role except for accounting, and I don’t want that one. I am still involved in the sales department with customers. I backup the sales guys when they get busy or go to lunch.

I take care of the computers. If somebody’s got a problem, they’re usually contacting me unless it’s a simple thing. I try to look at the numbers and see where we’re at for the month, for the year. I do a lot of the ordering of the equipment, any kind of system changes.

The new credit swipers were my responsibility.

What system were you using to process credit card payments before switching to Gravity Payments?

Jeremy: We started out like most other dealerships probably did, with a single credit card terminal. Of course, I can remember the days of the sliding machine and paper. We started with the first dial-up credit card machine, probably from our local bank. When I took over things in 2000, I let things roll like that for a year or two. Of course, more and more people were starting to pay. I knew we needed to get more terminals.

We needed to get integration into our business system so that it was less work on the accounting department. I contacted my account rep at DIS and they got me the first little USB plugged-in swiper connected to a keyboard. We moved along like that for quite a few years until the first chip cards came out. They came and told us how we were going to be out of compliance, and we needed to get upgraded. I ordered new card readers that day.

That worked for a while. Then, this past January, our DIS support rep said, “Hey, would you be interested in being on our trial for our new machines?”

We got started on emergepay. They just work flawlessly. They’ve been awesome. They’re way faster than these old Ingenico, whatever they’re called machines, way faster.

How has the emergepay system impacted how you serve customers?

Jeremy: It makes things easier. We’re able to get customers in and out faster. In our busy season, it makes it much faster. Plus, I don’t have to handle their cards. So many of them are just the wave cards today. It probably takes half the time for the card to get approved than the old system. It just moves much, much faster.

I guess the biggest thing for me is convenience. I’ve got one less electronic piece sitting on my parts counter because I don’t need signature pads anymore. Before, I had separate signature pads for my credit card swipers. It’s less confusing to the customer. It’s all right there. It’s one machine. It’s simple.

I like that it runs on wi-fi. Again, I’m not a salesman anymore, per se, but I still do backup the sales department. I don’t have a credit card machine on my desk, but when I do have that customer in here that wants to run a credit card – it happened just yesterday – I go grab one. The customer doesn’t have to leave and go to the parts counter. They can stay right here. I don’t have wires and stuff to deal with. I go grab it, we run his card, and we’re back at it.

How do you feel about the security you get with the new system?

Jeremy: I’m very confident with it. Like I said, being a DIS customer since 1986. Typically, if DIS gives me approval on something, then I pretty well trust it. That honestly has not been a concern for me with that.

That’s great—and how have you found the support from both DIS and Gravity Payments?

Jeremy: Honestly, I haven’t had a problem that I’ve had to contact them, but they have been on top of it.

How long have you been using DIS?

Jeremy: We started using DIS in 1986. I get courted by all the other brands, but I believe DIS is the best. I don’t see any reason to change. We’ve stuck with DIS. I’ve never even let anybody give me a quote otherwise.

Why have you chosen to stick with DIS for so long?

Jeremy: I don’t dislike change. I actually like change. But I haven’t changed from DIS since 1986 because I started with the best. Why change? All my manufacturers recognize DIS as being one of the top. I have begged other dealerships over the years to buy DIS just for its simplicity.

I didn’t have a dog in the fight, so it didn’t really matter to me, other than the fact that there are some dealers I’m close friends with and wanted them to have a good system.